So I just bought a scanner to scan the many pictures I have from my stay in Tibet in 2000 and 2001. While I spent most of my time in the capital, Lhasa, I have yet to get to those pictures. Consequently, I have selected a few pictures showing  some aspects of the daily life of the nomads in the Aru Basin.

On the road to the Aru Basin

The Aru Basin, is located in the northwest part of Tibet Autonomous Region (TAR), China. The closest town, or centre, is around one or two days drive away. From Lhasa, the capital of TAR, it takes from 5 to 12 days to drive, depending on road conditions. During summer, roads are wet and cars get stuck regularly. The basins remoteness also implied several logistical problems. As no food or equipment could be bought in the area (except some meat from local nomads), we had to bring all our necessities with us.

The Aru Basin as seen from space (Source: Google Earth). To see the Aru Basin in relation to the rest of Tibet, go to the post Climate Change, Risk Management and the End of Nomadic Pastoralism.

Nomadic hunters have probably used the Aru Basin for several thousands of years and by nomadic pastoralists for perhaps the past thousand years. However, little is known regarding this early phase of use. Sven Hedin met nomads in a valley southeast of the Aru Basin, in the beginning of the 20th century. At this time the Aru Basin had a reputation of being inhabited by bandits and robbers. Cecil Rawling noted in his book ‘The Great Plateau’ that five bandits were caught and beheaded in this area by Tibetan officials at the beginning of the 20th century. One of my informants told me that his grandfather had played a part in the robbing of “a few foreigners” at this time. Accordingly, the area got a reputation for being populated by bandits.  It is probable that these “bandits”, were in fact nomads that raided a camp of foreigners because the opportunity for an extra income presented itself. 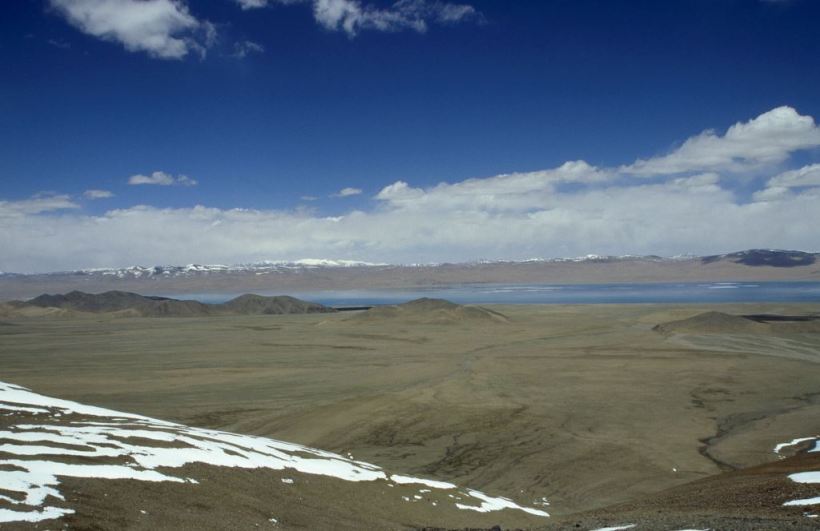 Some areal views of the Aru Basin.

The Nomads of the Aru Basin 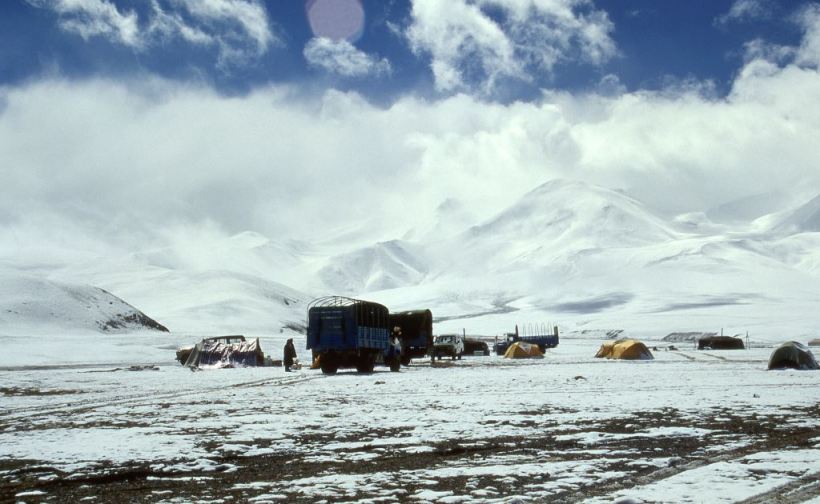 Sheep and goats returning to the camp in the evening. The sheep and goats that inhabit the Tibetan Chang Tang Plateau are adapted to a life at high altitude. Sheep have more hemoglobin and larger lungs than sheep living at lower altitudes, and also a thick coat of wool. Goats also have more hemoglobin, more red cells, and breath four times faster than goats living at lower altitudes.

Both sheep and goats produce milk, meat and wool and skins for the nomads. Goats produce more milk, and for longer periods of time than sheep, but the Aru nomads prefer milk and meat from sheep. 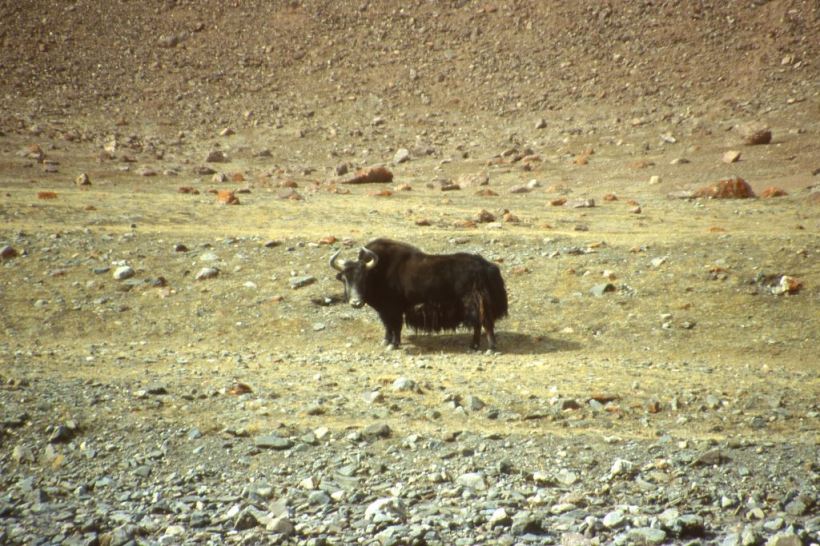 Yak. It is not known when nomadic pastoralism first emerged in Tibet, although it is doubtful that any large-scale nomadic pastoralism was possible before the domestication of the wild yak (Bos grunniens). Although the yak is usually considered to be the main distinguishing animal (note that this is in fact a picture of a wild yak), sheep were traditionally more important in the Tibetan nomads’ overall economy.

The yak is unique to the Tibetan Plateau and surrounding areas, and it is very well adapted to the cold and high altitude of the Chang Tang. Tibetans usually call the yak nor, a word that normally translates as “wealth”.

Preparing to move camp. The dismantling of the tent starts by taking down the poles on the outside and inside of the tent, and the removal of the spikes that secure the tent to the ground. Then the two halves of the tent are dismantled and packed in two big and heavy rolls. With the tent gone, packing the belongings inside the tent is easy, and takes maybe from half an hour to one hour. 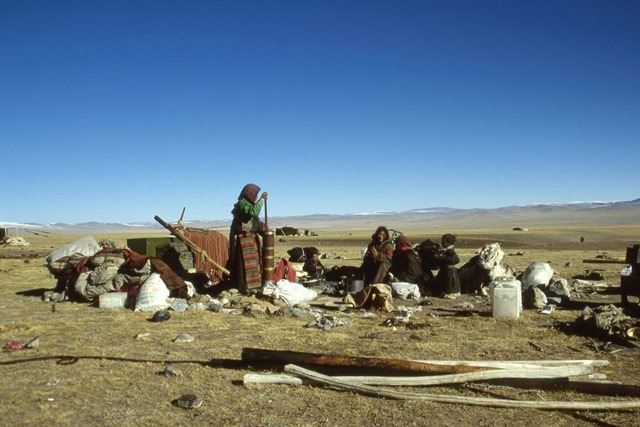 Butter tea. Where the last to be packed is the equipment used to make butter tea (made up of tea, butter and salt, and can be more easily compared to a mild soup or broth than tea):  the oven , the teakettle and the churner. Packing is also often halted due to making of another batch of butter tea.

And the new way with trucks. 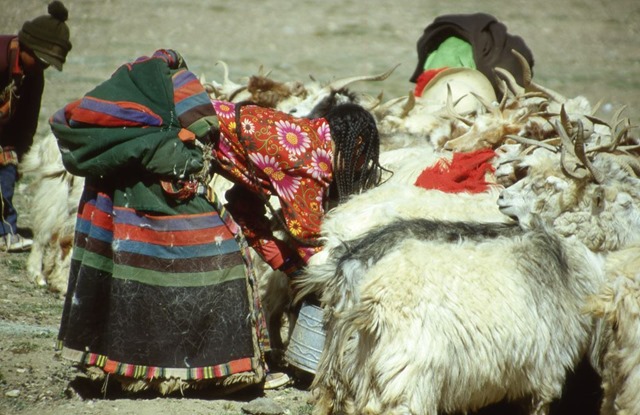 Milking is the responsibility of women. Milking is a time-consuming activity, especially during the summer season when animals are sometimes milked twice a day, once in the morning and once later in the day or in the evening. Animals are tied together, creating two lines of animals facing the opposite direction, making it easier for the women to milk them. Both sheep and goats are tied, intermixed in the same line 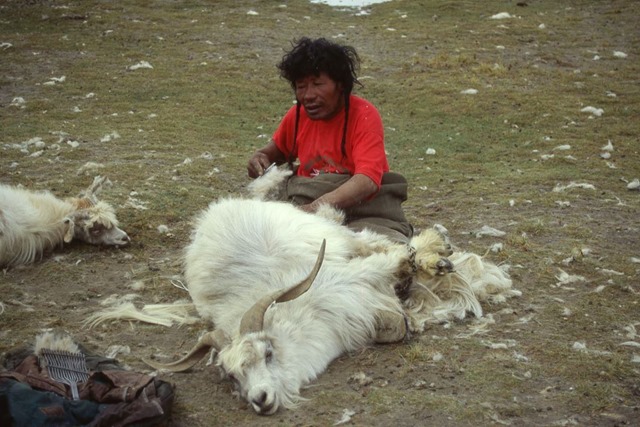 Shearing cashmere wool. Cashmere wool is the soft down undercoat of goats, and the nomads, come June, comb the cashmere, out with long teethed combs. Then they continue by cutting the long hairs, or tsiba, with knives so that they can get to the rest of the cashmere wool, which is sheared in June because this is when the cashmere wool has the best quality. Some nomads also try to “weed” out most of the long, coarse hairs that tend to be mixed in with the soft cashmere wool, arguing that this will give them a better price on the market.

Making butter the old-fashioned way: While women usually use a wooden churner for making butter, they sometimes also use a container made of sheep’s stomach. The container is inflated, yoghurt is then poured into it, and a woman shakes the container back and forth on her lap for a couple of hours. The end product is fresh butter.

Cheese. The leftover liquid from the butter-making process is either consumed directly, as low-fat yoghurt like product, or boiled and filtered, giving a white, corned cheese. The cheese is either consumed fresh, or left drying in the sun making the cheese into hard pieces that is edible for many years. The cheese, called churra in Tibetan, can be chewed for many hours, without noticeable reducing it’s size

The leftover liquid, after the cheese is removed is usually given to dogs and only sometimes eaten by the nomads. It can also be boiled until it becomes a dark and thick concentrate, which is regularly used as women’s black make up, claimed by the nomads to give a much needed sun protection. 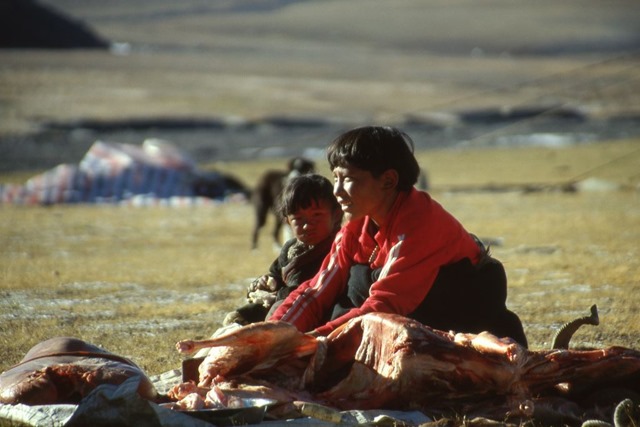 Butchering. In the Aru Basin sheep and goats are killed in the following way: the animal is held down to the ground, with a rope around its mouth and covering its nostrils, thereby suffocating the animal to death. Slaughtering is considered to be a male task, and there is a taboo against women killing animals. In Aru there are usually young men, starting around 16 years of age that both kill and slaughter animals.

November/December is the best time for slaughtering; the animals have then built up stores of fat from summer grazing, which adds to the meat a much appreciated taste, and have not yet started to lose weight as they do during winter and spring. Slaughtering at this time not only make sure that each animal yields the maximum calories, but also makes storage easier.

During November/December it is so cold that the carcasses freeze solid, making the problem of meat spoilage non-existent. The cold makes processing of meat unnecessary, and carcasses are stored whole, usually in the tents or are left hanging in their winter houses. It is not uncommon to see heads from sheep and goats lying around on the tent floor, or other parts from animals lying partially covered by the tent sides. 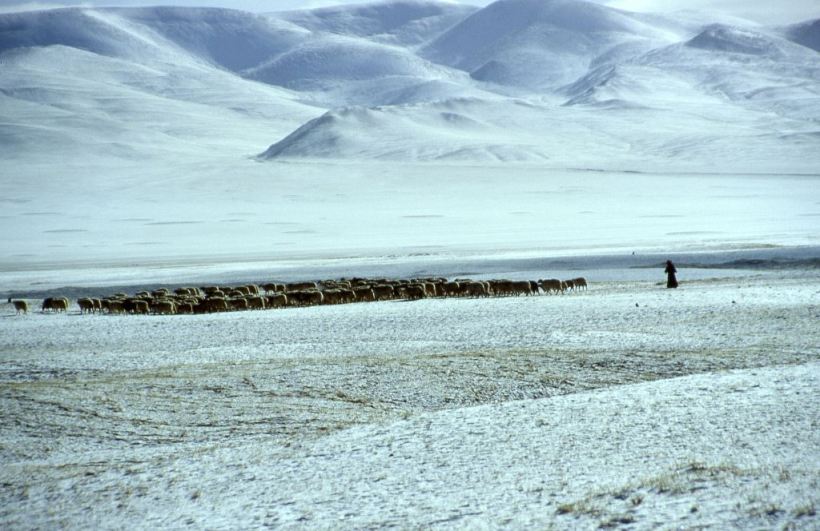 Herding. Herding sheep and goats is not a question of just bringing the animals to a patch of grass and let them stay. It requires continuous movement to follow the herd, which moves along while it browses (especially when it’s snowing!). This is usually done from sunrise to sunset, at an altitude of 5,000 m above sea level.

Even sheep and goats gets cold and want to stay in the tents!

During the spring of 2001 one family lost their winter house due to flooding. By the advise of a Lama they left the Aru Basin.

3 thoughts on “Tibetan lives: Nomads in the Aru Basin”